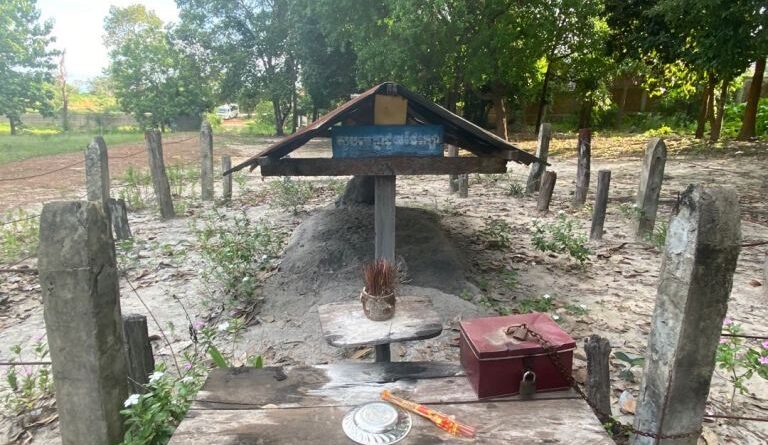 One of the things that sets dark tourism spots apart is the surreal feeling when you reach them. No tourists, few signs and a feeling that you can only get knowing something or someone ghastly has appeared on this spot sometime back in history. When it came to being surreal, the grave of Pol Pot ticked all the boxes.

Pot Pot might have been one of the most featured and indeed evil leaders of the world, but that has not stopped the locals of Anlong Veng from still revering him in some way and even finding it somehow “lucky”.

WHERE DID POL POT DIE?

Pol Pot was a founder and leader of the Khmer Rouge. The Khmer Rouge swept into power in Cambodia in 1975. They formed the short lived state of Democratic Kampuchea. And although the state may have lasted only 4 years the regime managed to murder up to 1/4 of the Cambodian population. In usual times, his overthrow should have meant an end to his “career”, but these were not usual times. Cold War politics dictated a usefulness for the Khmer Rouge and they became the main bulwark in Cambodia against Soviet hegemony.

Fast forward to 1993, the Berlin Wall has fallen and Cambodia is on the brink of peace. Fearing that not all that many people would vote for a party that had managed to kill so many people they fled to the jungles of Northern Cambodia where they battled on as the .

Their base? Anlong Veng, and this was where Pol Pot died.

WHEN DID POL POT DIE?

Following mass defections in 1996 and 1997, Pol Pot became increasingly paranoid and ordered the killing of Ta Mok and Son Sen. The killing of Son Sen and his family went to plan, with the family being thrown into a mass grave. Ta Mok though survived and thrived, taking over the leadership of the last of the Khmer Rouge and leniently placed Pol Pot under house arrest. Pol Pot eventually died on April 15th 1998, ironically, Khmer New Year.

WHICH LEADS US TO THE SURREAL GRAVE OF POL POT

Upon his death, his body and possessions were transferred to a site in Anlong Veng where they were put into a pyre and burnt along Buddhist principles. Quite ironic when you consider the treatment given to the buddhists by the government of Democratic Kampuchea. There is a video of the aftermath of his funeral on YouTube. It is quite surreal to see one of the most notorious killers of the 20th century being burned with his toilet

WHAT OF POL POT’S GRAVE TODAY?

The strange part about seeing his grave today is comparing it to the video of when he was actually cremated. Originally the area was abject jungle. Nowadays it is not only next to a main road leading to a Thai border post, but, in what seems like an act of trolling an extreme-left communist, also next to a huge casino.

Visiting the grave is easy enough in a vehicle and you are greeted by a very simple sign that points you towards the grave.

Before you’ve even had chance to start reasoning with your surroundings a group of kids notoriously show up from nowhere demanding money. The government do not charge for entry into “grave” of Pol Pot, so local kids feel they deserve it. Quite how much they know about the legacy of him is up for debate, but it is also a safe enough bet that they themselves are related to former members of the Khmer Rouge.

The grave itself is relatively unassuming, but clearly looked after by former KR members and their decedents. What sticks out are the two Buddhist offerings tables. One being wooden and falling apart, whilst the other is new and gold.

The older one was presented by locals, with the newer one being presented by a Said gentleman say that Pol Pot appeared to him in a dream and presented him with the winning lottery numbers. Well, everyone likes a story with a happy ending. Despite Pol Pot being an adamant anti-spiritual atheist, people now visit the mastermind of one of the worst holocaust in history for good luck. If that isn’t irony, I surely do not know what is.

Funnily enough there’s an hotel directly next to the cremation place of Pol Pot, which aside from being great location to sleep, makes night visits to the grave very easy.

Spooky night visit to the grave of Pol Pot now considered an auspicious location by the locals… It really. does not get any more surreal than that.